Review of Temple Grandin: How the Girl Who Loved Cows Embraced Autism and Changed the World | Kids Out and About Midcities

Review of Temple Grandin: How the Girl Who Loved Cows Embraced Autism and Changed the World 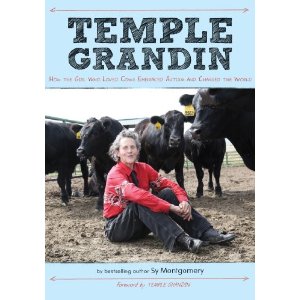 Be kind, for everyone you meet is fighting a hard battle.—Plato

These words are inscribed on one of the opening pages of Sy Montgomery’s latest book, Temple Grandin, How the Girl Who Loved Cows Embraced Autism and Changed the World (Houghton Mifflin Books for Children; April, 2012), a new biography about Temple Grandin that is designed for middle school and high school students.

Temple Grandin is one of a handful of experts who is responsible for redesigning facilities in which livestock are handled and slaughtered, helping the process become more humane. She also has autism.

We think of autism as a “children’s issue”—although of course, children with autism grow up to be adults with autism. Temple Grandin has written many books on the subject, including Thinking in Pictures and Animals in Translation. An HBO movie about her life, starring Claire Danes, was released in 2010.

But until Sy Montgomery’s book was published earlier this year, there hasn’t been any information about Temple Grandin written specifically for kids. I’m pleased to say that unlike many other biographies written for young people, Temple Grandin, How the Girl Who Loved Cows Embraced Autism and Changed the World,

doesn’t talk down to its readers. In fact, the author is so familiar with her subject that the language and rhythm of this biography is reminiscent of Grandin’s own writing. It almost might have been written by Grandin herself.

Who is Temple Grandin?

Grandin, 63, is a Professor of Animal Science at the University of Colorado and one of the world’s experts on animal welfare. She has been hired by many companies, including McDonald’s, to evaluate the way livestock are processed and to provide these organizations with the insight necessary to give the animals a better life and an easier death.

Grandin has remarkable insight into why animals react the way they do, and what comforts them. This, in turn, helps her alter livestock enclosures and procedures to ease fear and provide a more pleasant existence.

How has she herself achieved this insight into how animals think and feel? She would say it is her autistic mind. Grandin’s autism carries with it the unique ability to think in pictures, which allows her to see things as an animal might see them.

Of course, thinking in pictures rather than words made Grandin’s childhood a struggle, particularly in school; humans use words to communicate, after all. But channeling this ability into a profession has allowed her to speak for the tens of millions of food animals in this country that previously had no champion.

Temple Grandin, How the Girl Who Loved Cows Embraced Autism and Changed the World, chronicles Grandin’s life and her many accomplishments, but much of the focus is on her childhood. Grandin was diagnosed with autism at the age of three. The book follows her trajectory from a being a child who could not speak as a preschooler, through early school years and a painful adolescence when she was often ridiculed and misunderstood, to a young adulthood full of similar adversity, to the present day.

The story enumerates Grandin’s many champions, starting with her mother, who resisted tremendous pressure to have Temple institutionalized as a child, believing instead that she had much more to offer. She sought out schools and learning opportunities for her daughter that would help young Temple focus on her abilities. The book also speaks of her childhood friends, who accepted her for who she was and were able to connect with her by finding common ground. But in spite some positive experiences, Grandin was still exposed to cruelty and ridicule during many of her school years, and even well into her adult professional life. The book discusses some of these incidents quite candidly, as told by Grandin herself, enabling the reader to see it both from her perspective and the offenders’.

As an adult, Grandin became an outspoken advocate not only of animals, but of others with autism. She is an inspiring writer, speaker, and teacher. Somehow, she is able to translate her own thoughts—pictures—into words that those of us without autism can understand, to help us see what it’s like from the inside. She encourages all those who suffer from the disorder to find the unique strengths resulting from their autism and cultivate them, using them as a way of creating a fulfilling life beyond the diagnosis.

Why I liked this book

There are a few themes in this book that deserve attention.

There are few disorders as complicated, as diverse, or as ubiquitous as autism. Sy Montgomery’s book puts a face on it—Temple Grandin’s face—but also describes some of the things she thinks and feels in such a way that the reader can begin perceive how difficult life must be for those suffering with it. For example, she describes how Grandin was sensitive to any loud sound as a child, and how difficult the clanging of the school bell was for her when it signaled the change of classes. Or how some clothes or sweaters would feel unbearably uncomfortable to a child such as Grandin, who was so sensitive to texture and touch.

Eventually, the reader starts to realize that what is often considered part of the mundane can represent a huge obstacle in an autistic child’s everyday life. I found this insight into the condition very useful. I am not directly affected by autism in my own family, but I can easily list ten friends and colleagues who are. Ten. Two boys in my son’s class are autistic, and another friend on his baseball team also has the condition, so really, this information is useful to my son, even though he is only five years old. Which leads me to the second theme….

The book does not dwell on how Grandin was bullied as a child, but it does recount some incidents that illustrate how difficult it must have been for her. They are told in her voice, with the straightforwardness and candor for which she is famous. There isn’t an ounce of self pity or malice in her retelling, which makes it all the more difficult to imagine how she not only withstood it but transcended it. It makes the opening inscription,” Be Kind, for everyone you meet is fighting a hard battle,” all the more meaningful.

The term "neurodiversity" was unfamiliar to me until I read this book. Montgomery defines it as “the natural differences in our brains and nervous systems” and encourages us to recognize that “different” does not necessarily mean “disabled.” Her book demonstrates how a mind such as Grandin’s can succeed when the differences are celebrated rather than dismissed.

Who should read this book?

This book is geared toward 'tweens, and I think it is appropriate for those between 5th and 8th grade. I very much enjoyed it as an adult, though, and I was immediately hungry to read all of Grandin's books for adults. At about 130 pages, it is not a long book. It is full of pictures of both Temple Grandin and several of her engineering designs.

Grandin’s story is interspersed with information about autism, neurodiversity, and animal welfare; the facts are presented in a clear and concise way, making it easy to understand. Neither Sy Montgomery or Temple Grandin are on a soapbox here. There are no elaborate or gory details about livestock handling or factory farms. And no one is preaching vegetarianism either, least of all Grandin.

I think Temple Grandin, How the Girl Who Loved Cows Embraced Autism and Changed the World should be a mandatory read in middle school. Why? Well, from the practical standpoint, there is a noticeable lack of vampires and wizards. That is, this is not a book most kids would pick off the shelf, so having it be assigned in school may be the best way to get kids to read it. It will especially appeal to children who have autism and children who love animals or are concerned with animal welfare. Temple Grandin is a rock star in both of those worlds, the word has gotten around that this book is available, and so kids with those interests will seek it out.

But I think this book should have a broader audience because of the three themes mentioned above: autism, bullying, and neurodiversity. This would be a great book to read in science class, because it engagingly tells the amazing story of an unconventional brain at the same time as discussing the subjects of autism and animal welfare… with a beautiful yet subtle undercurrent that urges kids to be kind.

I know that’s what I want for my kids when they reach the preteen years: I want them to recognize diversity as they embrace, investigate, and acknowledge the science behind it. Most of all, I want them to be kind to those fighting the hard battles. Temple Grandin’s amazing story brings us one step closer to living in that kind of world.