Disney in Concert: Magical Music from the Movies | Kids Out and About Midcities

Disney in Concert: Magical Music from the Movies 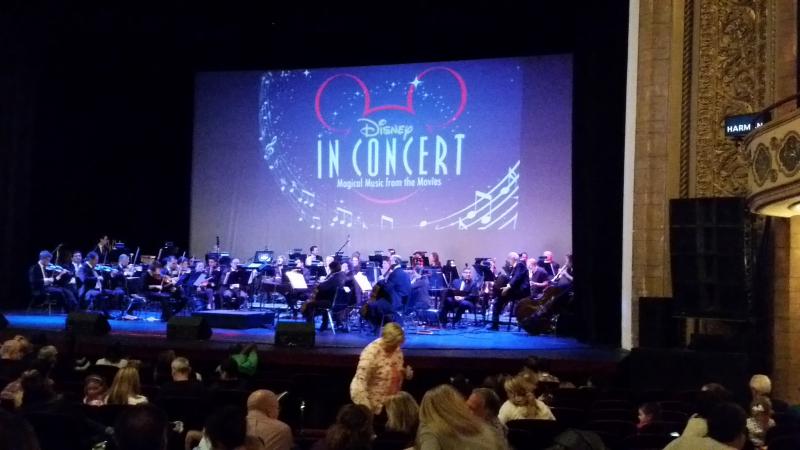 Recently my family and I had the opportunity to see “Disney in Concert: Magical Music from the Movies” at the Palace Theatre in Stamford. The theatre is a non-profit organization, and has been a part of the Stamford community since 1927. It has been going through a multi-phase renovation which now included a state-of-the-art box office, elevators, coat checkroom, concession stand and additional restrooms on the main and upper levels.

This concert was a feast for the eyes and ears with the Regal Pops Orchestra, conductor Dirk Hillyer and four phenomenal singers, Lisa Livesay, Whitney Kaufman, Aaron Phillips and Nathan Riley, who performed with clips of various Disney movies behind them on a large screen. All I can say is if it comes back to the area, go see it! Here’s why.

As we walked into the Palace Theatre from the parking garage, conveniently located across the street, I noticed a lot of preschool children, particularly girls dressed in Anna and Elsa costumes. I began to get nervous that this was going to be a preschool show and that my 9 year old daughter and 6 year old son would not enjoy it. However, I should have realized that with anything that Disney does, there is something for the whole family. When we sat down and I looked around the theatre, there were people of all ages including a couple behind us with no kids! They were there, as we all were, to enjoy the wonderful music from so many Disney movies.

The show opened with a medley of Disney favorites including Zip-A-Dee-Doo-Day. The screen behind the orchestra flashed scenes from Peter Pan, The Lion King and many other Disney classics, including the original open for the Mickey Mouse Club. I’m sure there were grandparents that enjoyed that. As the clips flashed, children would shout out the names of them. There was music from other Disney movies, including Beauty and the Beast, The Little Mermaid, Mary Poppins, and Aladdin. The conductor would pause at times to speak to the audience. One bit of Walt Disney trivia that he shared was that The Jungle Book was the last movie that he supervised.

The concert is 2 hours long with a 15 min. intermission. To be honest, the time went quickly. It was a kid-friendly show in that many of the preschool kids left their seats and went to stand in front of the stage and dance! However, there were a lot of little kids so expect to hear them crying. What I thought was great was that if you have to take your crying child out of the theatre, the music was being played over the speakers in the lobby.  You won’t miss anything.

Don’t expect to get out of this concert without hearing “Let It Go.” I was surprised that none of the children sang. Everyone listened as it was sung by Ms. Kaufman, who did not even try to compete with Idina Menzel. She had a style all her own which may have been why no one sang. They were all listening to her beautiful performance! The kids did begin to get restless about halfway through the second act. It may be a bit long for the little ones. However, the concert ended with a song that most of us are familiar with, “It’s a Small World.” If you are a Disney fan, you really don’t want to miss this concert. How can I be so sure? My son said he’d like to see it again next year.

Diana Palmentiero is the Fairfield County editor of Kidsoutandabout.com. She resides in Fairfield, CT with her husband, daughter, son and their cat, Einstein.