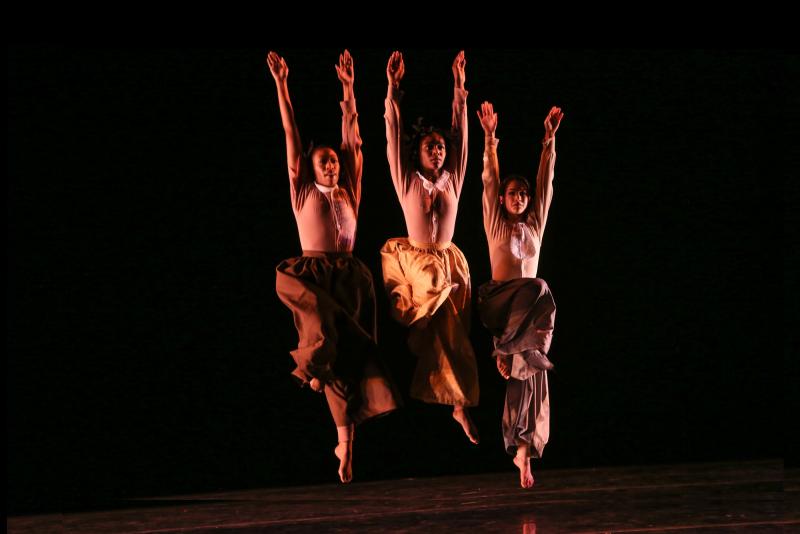 Estrogen/Genius, choreographed by Garth Fagan, is finely delivered “In Absolute Protest” of the “Me Too” movement. The program is inscribed with the words: “In protest of Harvey and his cohorts, who without conscience, practice and promote molestation of our Mothers, Wives, Sisters and Daughters.”

Natalie Rogers opens Estrogen/Genius, lighting the stage with her presence. With exquisite physical and emotional balance, she alternates between a powerful, proud woman, and one who is threatened by external forces. At one moment, she is holding a seemingly impossible pose or jumping high into the air. The next, she has collapsed into a posture of oppression, repelling unseen tormentors and shielding private body parts. Adriene B. Hodge, Sarah Herbert, Rishell Maxwell, and Anna Lee then ripple across the stage in solos, expanding the physical vocabulary of strength and vulnerability. It is only in the solidarity between the women that vulnerability is shed, and joy is revived.

Distant Kin, choreographed by Norwood Pennewell, is making its Rochester premiere. Pennewell’s piece presents an amalgam of African and contemporary dance influences in an altogether entrancing piece that showcased the strength and dynamism of the dancers; fast-paced, kaleidoscopic movements halt abruptly in athletic balance or meld into languid movement. The costumes, created by Keiko Voltaire, reinforce the magic of this number.

Mudan 175/39 is a beautiful revival piece choreographed in 2009. The dance opens with Guy Thorne’s explosive leaps and spins giving way to mesmerizing group numbers filled with exquisite tension, sculptural poses where women are lifted as-is, and moved around the floor like chess pieces, and Fagan’s distinctive form.

The North Star, a much-awaited piece choreographed by Garth Fagan, commemorates the 200th Anniversary of Frederick Douglass’ birthday. This five-part work focuses on the life and legacy of the historic statesman, orator, author, publisher and abolitionist.

Mr. Fagan pays tribute to his own homeland of Jamaica, by opening the work with The Melodians’ “Rivers of Babylon Psalm 137,” the psalm which was Frederick Douglass’ favorite. Steve Humphrey, an original member of Garth Fagan Dance, endows the piece with power and reverence.

From there, Mr. Fagan choreographs to various jazz pieces, music Douglass would undoubtedly have loved.

In section two, the frenetic chase, and the staccato, defensive postures of Norwood Pennewell as Douglass, and Vitolio Jeune, Davente Gilreath and Le’Tiger Walker denote a dance of desperation, as the four labor under cruelties and attempt to escape from slavery.

Part three offers a powerful, touching and emotion-filled duet representing the relationship between the elder Douglass (Pennewell) and his younger self (Jeune), as each looks to his past or future self for encouragement and inspiration.

Portraying the four women who most strongly influenced Frederick Douglass’ life, Natalie Rogers, Rishell Maxwell, Adriene B. Hodge and Anna Lee present a sisterhood of strength, love and inspiration. Whether gently caressing and twirling the imaginary child high in the air, or providing solace to a more mature Douglass or to each other, the women’s dance weaves a comforting quilt of love, compassion and courage.

The final section, that features one of Olivia Kim’s stunning statues of Frederick Douglass, commissioned by RCTV’s Carvin Eison as part of the Douglass Tour, is an exciting, vibrant celebration in dance by the entire company of the life and legacy of a man who made an incredible impact on this world.

As I watched, I was struck by how many of the numbers in this program transcend the dimensions of time and space, to encompass a carefully-crafted dimension of sheer emotion...a wonderful place for Art to dwell.

Garth Fagan Dance is onstage at Nazareth College Arts Center through December 9.  Tickets are available for purchase by clicking this link.